To consult our image bank, please make an appointment via e-mail c/o hertitagesutton@gmail.com. Clearly indicate what it is that you want to research.

You can directly access two thematic photo banks by clicking on the following links:

The late 19th and early 20th century was a golden age for headwear. Etiquette dictated that one never went out without a hat. There was a hat for every occasion to the point that a high society lady would sometimes change her hat several times in the same day: for the garden, going shopping, visiting a friend or attending a party. 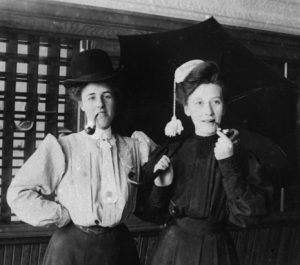 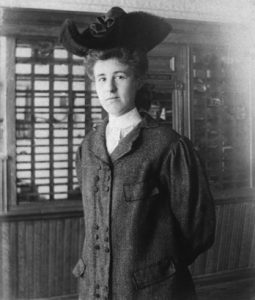 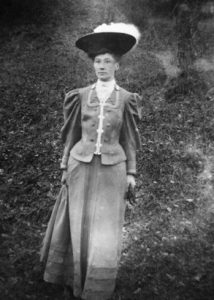 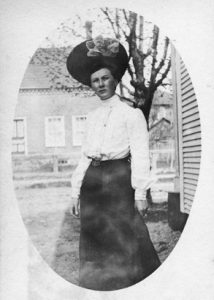 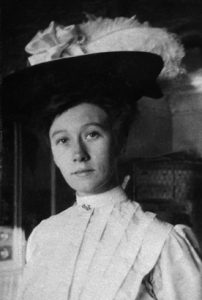 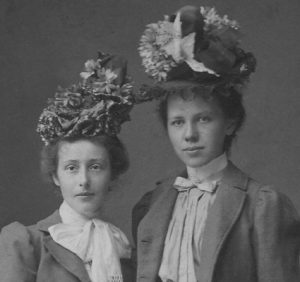 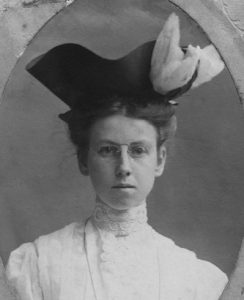 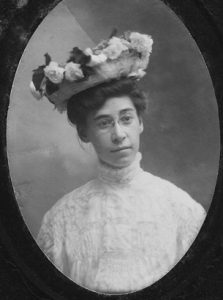 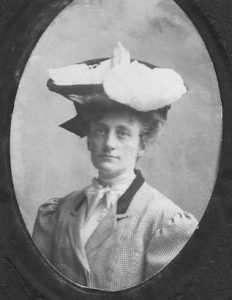 Fashion rapidly took charge of this common item of clothing. Hat makers and designers created hats whose extravagance makes us smile nowadays. In the 1880s and up until World War I (1914-1918), hats grew ever larger and were adorned with a plethora of ribbons, tulle, flowers and feathers. The feather-workers, who collected the feathers for decoration, were much in demand. It went as far as even using stuffed birds as ornamentation. The use of wild ostrich feathers and dead birds eventually caused such a controversy that their use was banned.

Some hats were so enormous that one wonders how they stayed on the head. Not surprisingly we see the introduction of long hatpins. Some could reach 18 inches (45 cm) in length, making them, it was joked, a weapon against unwelcome male advances.

In its archives, Heritage Sutton has found portraits of women wearing hats. For the most part the sitters are anonymous but these women demonstrate how life was lived at the end of the reign of Queen Victoria and during that of her son, Edward VII.

These photos of desolation were taken the day after the great fire of Sutton by the photographer Frank Wheeler of Richford, Vermont. The fire started during the night of April 15 1898, and destroyed 35 buildings, causing the devastation of much of the town centre. Luckily no lives were lost.

To understand the maps one needs to know that some street names have changed : at that time our rue Principale was called Main Street and rue Depot of today was called Boright Street. Our current rue Pine was called Depot Street in 1898. 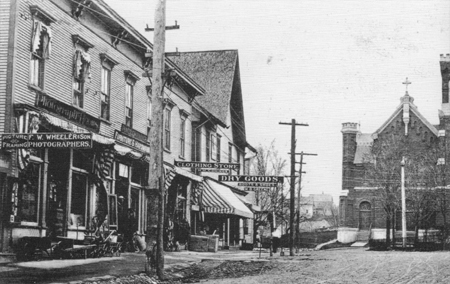 On the left, Frank Wheeler’s studio in Richford. 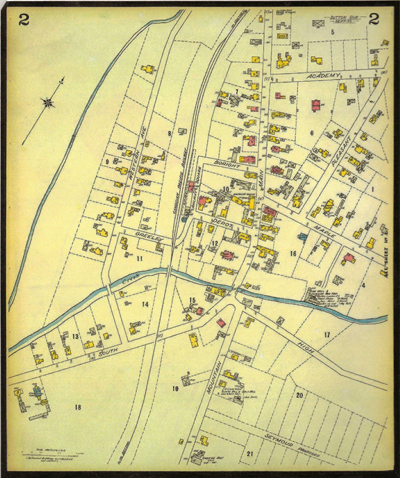 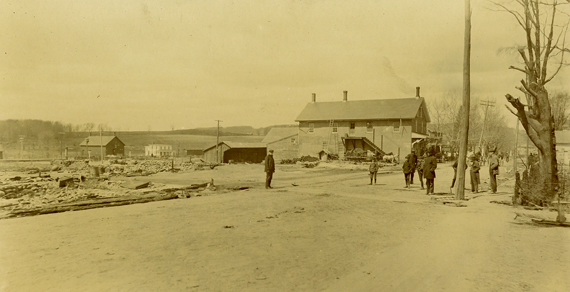 From the corner of maple Street can be seen the Boright & Safford Store and its horse barns, untouched by the fire. On the left, one after the other, are the foundations of the post office, the Ed. Martin house, the E.R. Shepard Store and the Curley Hotel. 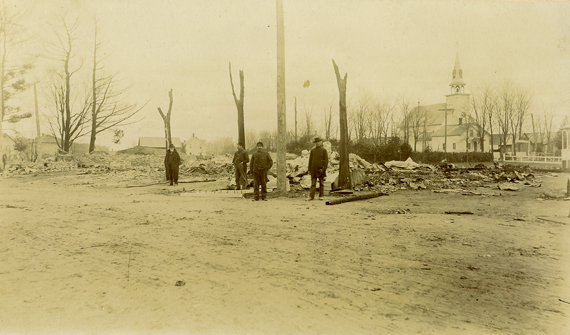 Four of Sutton’s dazed citizens looking at the ruins of the general store and Frederick Olmstead’s mill on the southeast corner of Maple and Main streets. In the background, untouched, the Methodist-United Church and its parsonage (no longer in existence). 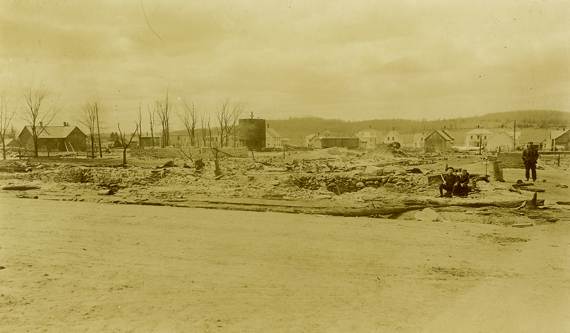 From Main Street, from which the buildings disappeared, Frank Wheeler pointed his camera westward towards the railway tracks. At the centre of the image, a solitary water tower dominates a freight car. On the left, the Thompson & Greeley Store hides the Town House. 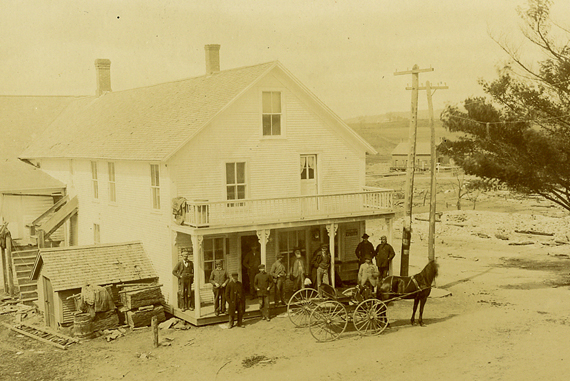 From the second floor of the Dyer Store (now the L’International Restaurant), Frank Wheeler photographed the Thompson & Greeley General Store where today stands the Boni-Soir convenience store. A dozen men observe the picture-taking. The pine tree on the right lent its name to what is now Pine Street. 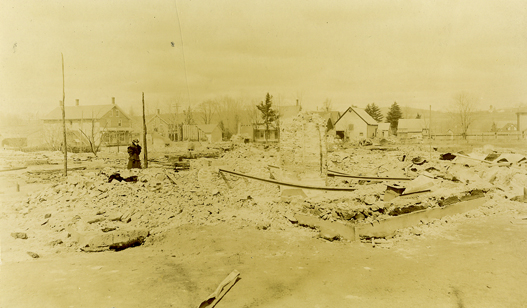 The ruins of Dr. McDonald’s house on the corner of Maple & Pleasant with only the chimney rising above them. Rebuilt using the original plans, it now is the site of Le Pleasant, a hotel and café. 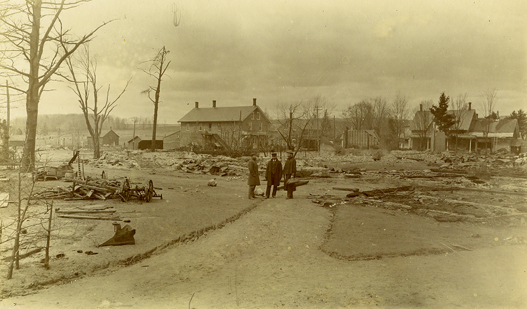 Three men stand talking in the midst of the ruins of Dr. Cutter’s house, which stood on the northeast corner of Main & Maple, and those of Dr. McDonald’s house on the corner of Main & Pleasant. 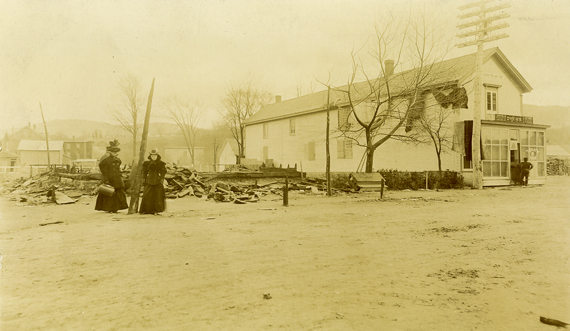 Built in 1843 for the Dyer family, this general store housed, in 1898, the telephone central office. Behind the two women rise the ruins of the Hawley Store. A chocolate store now occupies this site. 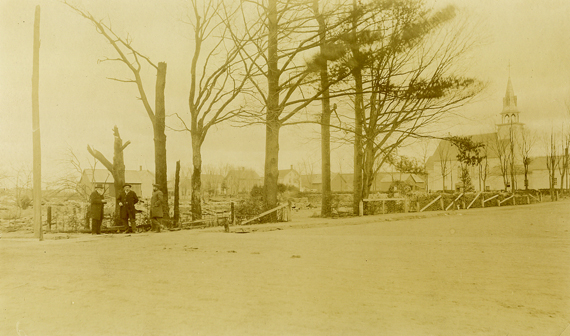 Three men stand in front of the burnt trees and the ruins of Dr. Cutter’s house and pharmacy on the northeast corner of Maple & Main Streets. On the right, the Methodist Church located on the corner of Pleasant Street. 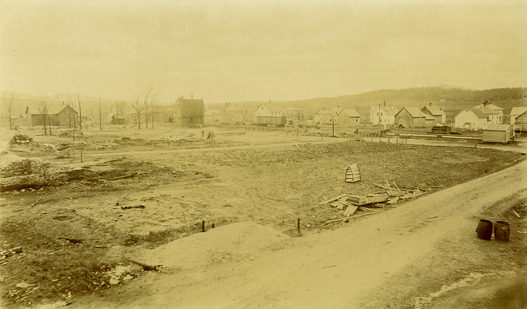 Again from the steps of the Boright & Safford Store, Frank Wheeler photographed the great emptiness resulting from the fire on the other side of Boright Street where several buildings had stood: the tannery, the bakery and the Lebeau Hotel. 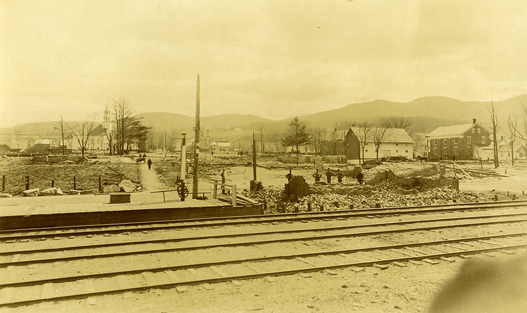 The foundations of the Canadian Pacific railway Station and the merchandise platform next to the railway tracks. On the right, the back of the Thompson & Greeley Store hides the Town House and its horse barn, both untouched by the fire. In the background, on the left, the Methodist Church. 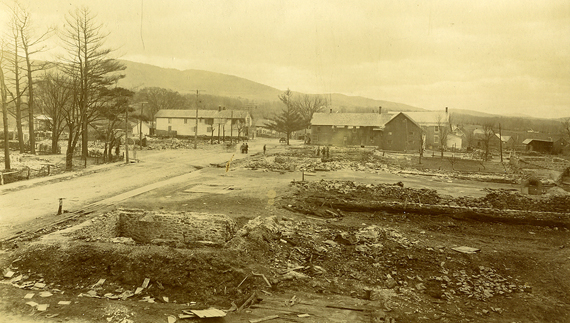 View towards the south of Main Street taken from the steps of the Boright & Safford Store. Everything is destroyed up to the Thompson & Greeley Store, the Town House on the right and the Dyer General Store on the left. 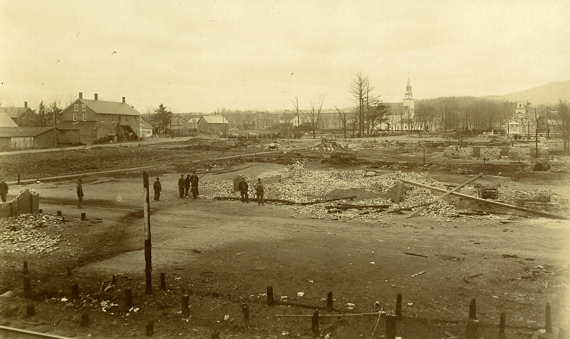 Villagers looking at the foundations of the Lebeau Hotel as well as those of the tannery and bakery. On the left, Boright Street runs beside the Boright & Safford Store (now Rumeur Affamée). On the right, the Methodist Church can be seen.
×
Scroll To Top