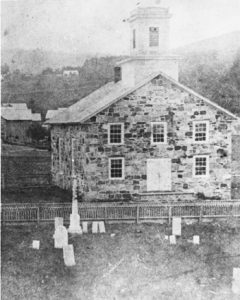 Sutton's remaining four large cemeteries contain deceased by the hundreds, if not thousands. These have not been inventoried. We are here speaking of the new Saint-André on Academy, Grace and Fairmount Cemeteries on Maple, Brock Memorial Cemetery in Glen Sutton. However, all tombstones dating from 1870 and before as well as those from the Legion Cemetery (which is enclosed in the Fairmount Cemetery) were photographed, but nothing else.

Cemeteries change over time. Vandalism might damage stones, or else property owner neglect might affect them. Furthermore, time erodes inscriptions. Whereas the main objective of this inventory was to safeguard data, we also wished to make this information available to the public. Thus, the database can be accessed by anyone who needs to locate an ancestor's stone and to actually see a photograph of it.

We also hope that different researchers (historians, anthropologists, genealogists, etc.) find relevant information in this inventory. Should they require access to the complete database they can reach us at heritagesutton@gmail.com. This database features 730 documented tombstones, including the literal epitaph transcript, a design description, deceased and stone related data, as well as the entire seventeen hundred (1700) photograph collection.