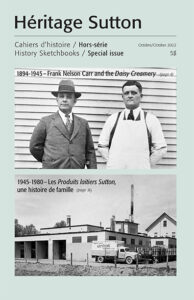 Héritage Sutton publishes a special issue dedicated to the history of the old dairy and to Sutton’s rich agricultural past. A history in two parts. The first one covers the period from 1894 to 1945, during which local investors were in charge; the second part relates the period from 1945 to 1980, when the Boulanger family was the owner.

Two witnesses to this period write texts that draw on their memories and knowledge of milk processing operations. Cecil Carr, who worked at the Butter and Cheese Manufacturing Society for fifteen years between 1930 and 1945, recounts the involvement of his father, Frank Nelson Carr, who was the manager and one of the shareholders since 1919.

Denis Boulanger, whose family bought the dairy in 1945, shares his memories of what then became Sutton Dairy Products. He knows the old dairy well: he played there as a child, held his first jobs there, and was a privileged witness to its evolution. These two witnesses also explain how, in their time, the milk of dairy farmers was transformed into butter or powder.

This issue was launched on the occasion of the fourth edition of Mémoires en fête which was held on October 15 and 16 in the former dairy, now the Sutton School of Art. A large audience visited the old dairy and follow the explanations and comments of Denis Boulanger. 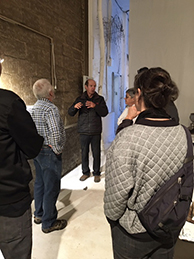 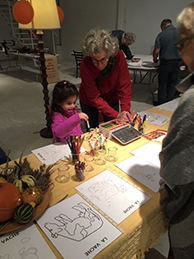 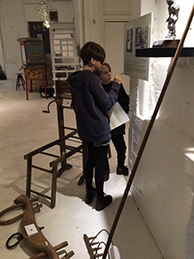 Throughout the weekend, the kiosks set up in the large hall allowed young and old alike to find or discover the different objects used in agriculture and those used for the processing and transportation of milk. A series of explanatory and illustrated panels made it possible to follow the whole industrial process of the manufacture of butter and milk powder.

This special issue of History Sketchbooks is available at our online store for $5, excluding subscription.
Back to the News
×
Scroll To Top