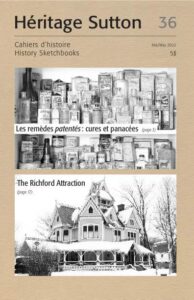 In his article on patent remedies, Martin Gagnon shows how, until governments regulated practices, potions, elixirs, and ointments of all kinds with miraculous virtues circulated without constraint throughout the countryside. For his part, Serge Jothy strived to trace the physicians who practiced in Sutton over the last two hundred years.

In addition, The Richford Attraction by Meredith MacKeen demonstrates the extent to which the small American town next door was frequented by residents of Sutton Township for whom the border was almost non-existent, at least until recently. Finally, Alan Pavilanis tells the story about the Prentices who, since some 130 years, built and occupied the house on North Sutton Road and that his own family bought in 1966 and still owns.

Back to the News
×
Scroll To Top